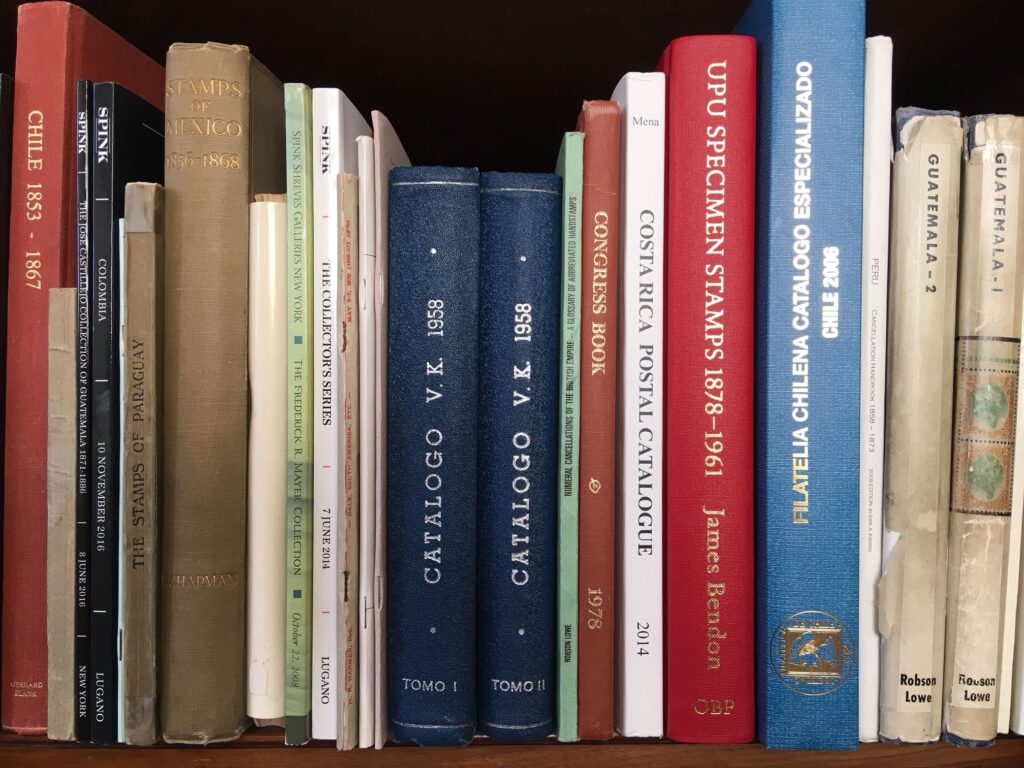 These pages provide the most comprehensive overview of Latin American specialized catalogues on the web, together with information on dedicated, single-country philatelic societies.

Let me qualify that: ‘overview’ is the operative word here.

I have subjectively chosen the key resources that a collector may want to consider as their first ‘port of call’ in philatelicly exploring Latin American countries in depth.

The objective is to help you identify the primary sources of information that really ought to be towards the top of any Central and South American collector’s list.

If there is one thing stamp collectors are not short of, it’s information. There is no other hobby with such a wealth of knowledge to support it.

The APS Philatelic Library in Pennsylvania holds more than 23,000 books and 5,700 journals. In the UK, the Royal Philatelic  Society is heading towards 550,000 record entries with a further 420,000 entries accessible from other libraries worldwide.

And these are but two of the many philatelic libraries found around the world.

As if this wasn’t sufficient to keep you occupied, the internet has spawned a dizzying array of websites from societies, organisations and enthusiasts on every philatelic subject imaginable. And it increases day by day.

Finding your way through can be a daunting task. If you are looking for something specific you may, in the first instance, want to stop by at the Global Philatelic Library website to get an idea of the key institutional resources and see where your searches lead.

Latin America is catered for as well as any other geographic area but to ‘go deep’ and really understand a country, joining one or more of the national societies will prove rewarding.

Wherever possible, I have included a link to the web address of each active society.

Society website quality ranges from the utilitarian, functional ‘members only’ types through to those that provide an incredible depth of knowledge for free. Non-organisational websites are purposely limited to enthusiast sites that add significant value to a particular country and are worth taking the time to explore. You’ll find many more with a bit of casual web browsing.

It is also worth exploring some of the links provided in the ‘Countries’ menu of The Digital Philatelist.

There are also two dealer associations in South America: one in Argentina and the other in Brazil (details shown under the respective country listing).

Promoting and binding together the multiple associations and federations within Latin America is FIAF Federación Inter-Americana de Filatelia (ES). Based in Costa Rica, FIAF supports and offers sponsorship to philatelic events across the continent.

It is worth noting that both Scott and Stanley Gibbons have published ‘semi specialised’ listings that cover all Latin American countries and go into a greater level of depth than is found in their simplified catalogues.

Scott’s listings are incorporated into their Classic Specialized whereas Gibbons has separate volumes for  both Central and South America. These were last published in 2007 and 2008 respectively, with no prospect of an update on the horizon. SG has sold through their existing stock so your only option is the second hand market, unless the publisher decides to add them to their growing digital collection.

Michel has a single volume dedicated to Central America (Mittelamerika 2019 is the latest edition) and a two volume catalog (Sudamerika 2020/2021) covering South America. One of the biggest benefits of a specialized catalogue is that they usually contain information on print volumes per issue, an excellent indicator of comparative rarity (and thus price or value).

A quick tip: the older Michel catalogues used to include print volumes in their listings and can be picked up for very little second hand. My copy from 1988 contains print quantities although I’m not sure in which year they were dropped from the catalogue.

However, for the truly specialised listings, we need to look at the individual countries themselves…

Most of the twenty Latin American republics have produced specialized stamp catalogues at some stage. For the Central and South America collector that has relied on simplified listings, the specialized catalogues offer up a huge range of new possibilities, with a significant numbers of varieties to collect that have never made it into the mainstream publications.

Unlike the larger publishers that tend to have more frequent publication schedules, Latin American specialized catalogues are usually published very intermittently, often with long gaps between revisions or new editions coming to market. As such, many of these catalogues can no longer be purchased ‘off the shelf’ and you will need to scour online marketplaces, auctions and specialist philatelic book dealers to secure a copy.

Catalogue values are usually in the local currency. Time and currency exchange rates will have played havoc with these numbers but, alongside print volumes, they still play an important part in helping you to understand which varieties have the higher levels of scarcity and to establish your own feeling for what a fair market value may be.

Each listing gives details of the most current version of each catalogue, where known. I wrote an article on Latin American catalogues for The American Philatelist magazine (January 2022) where you will find additional imformation on editions, page counts, ISBN’s etc.

Very few newly released catalogues are distributed beyond the country in which they are published. In most cases, for catalogues printed within the past few years, an enquiring email to the predominant in-country society is your best bet in ascertaining whether stocks are still available and at what cost.

Information changes, links go dead and new resources emerge. If you notice anything that doesn’t look right or you have any suggestions for improvements, please drop me a mail at nick@classiclatinamerica.com and let me know.

Note: ES, EN etc denotes the language in which each website or publication is written. If you don’t speak Spanish or Portuguese, accessing websites via Google Chrome will offer instant, very workable translations if required.

Go to the Central America section