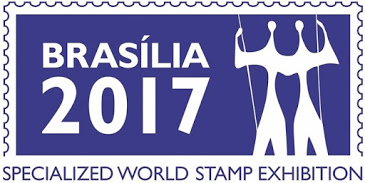 If I’ve read one article on “how do we attract more collectors to the hobby?”, I must have read it a hundred times. And no stamp exhibition escapes the post-event commentary on “how many visitors really attended?”, “how did it compare to last time?” and “what do we need to do better to encourage greater participation?”.

I think Brazil may have the answer.

Coleccionar 2017 (Collecting 2017) was a six day event that was designed to attract a wide spectrum of visitors in a single space, including:

Oh, and it also included Brasilia 2017, a major international stamp show under the patronage of the FIP (Fédération Internationale de Philatélie). With 2800 exhibit frames, a further 400 organised by the Brazilian Federation of Philately and the usual blend of international and national auction houses and dealers, this was quite an event.

Latin American awards sweep the board

Naturally the show attracted a significant number of Latin American competitors with a good spread of fine material displayed from across the continent. The regional bias was reflected in the results www.f-i-p.ch/wp-content/uploads/BRASILIA-2017-Results-by-Medal.pdf with six of the nine FIP Championship Class medals going to South and Central American entries and in the Large Golds, half of the eighteen awards went to Latin American exhibits.

What this innovative show has done so well is to gather a diverse selection of interests under one roof, exposing visitors to events that they may not have made the effort to visit in isolation. By creating a ‘collecting event’ this then opens up the possibilities of cross-promotion and interest to a much wider audience.

Of course this needs far more organization and co-ordination than a single event but the rewards could be substantial, with the potential to vastly increase footfall and reduce costs through shared expenditure.

Let’s see if the idea catches on.