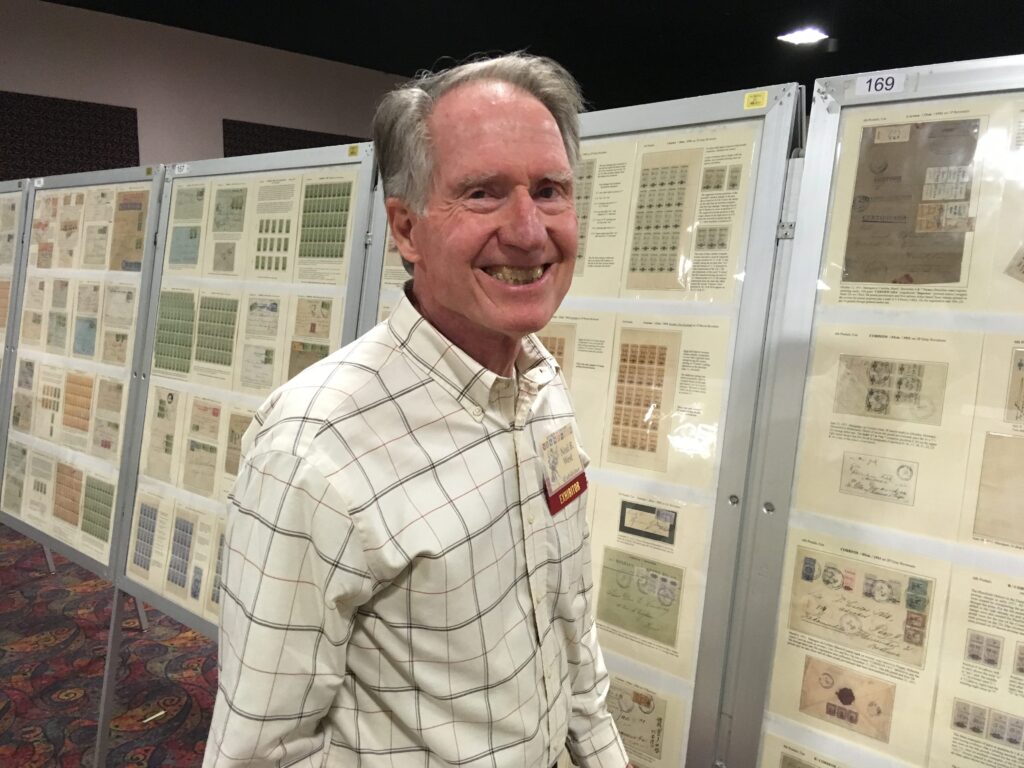 For more than twenty years, Neal West was the President of The Nicaragua Study Group (N.S.G). His most recent exhibit is Nicaragua’s Revenue Based Postal Provisional Stamps and Uses 1908-1911.

CLA How did you first begin to collect stamps?

NW My father was a life-long stamp collector and not surprisingly (for the period of the late 1940’s and 1950’s) I grew up collecting mostly used worldwide stamps. Of course inexpensive mint stamps were added occasionally since the ‘pictures’ on the stamps were so much nicer with ‘light’ or no cancels.

NW I traveled by car through Mexico and Central America to San Jose, Costa Rica in 1972 and was fascinated with these exotic places, especially Nicaragua and Costa Rica. So from that point on I collected Central American stamps.

Over the next 15 or so years I was able to put together quite advanced, mostly mint stamp collections for all Central American countries. Guatemala and Costa Rica had very active specialty societies that I joined.

Then in 1990 I was offered the chance to become a founding member of the Nicaragua Study Group (I discovered years later that Clyde Maxwell, the N.S.G founder, had obtained the names and addresses of people who had expressed an interest in Nicaragua when they joined the American Philatelic Society).

I immediately recognized that scholarship about Nicaraguan philately was at an early stage and that almost any manuscript was very welcome in the N.S.G journal, Nicarao. Clyde encouraged me to help fill the pages with any subject related to Nicaraguan philately that interested me at the time.

Since I had written many scientific research articles in my profession, putting thoughts down on paper (and negotiating with editors) was not a new exercise for me, as this was a skill that I already had.

CLA Why is Nicaragua an interesting area to collect?

NW For the past 170 years (which has roughly coincided with the postage stamp era) Nicaragua’s history has been as turbulent as any country. For a North American, the revolutions, dictatorships, U.S. Marine interventions and Inter-oceanic Canal controversies helped to create an exotic, romantic fascination with the country – which, quite naturally, was reflected in the stamps.

And when I came to recognize that the postal history – i.e. the stories revealed on covers –  was a rich source of stories that could be told, I was hooked.

CLA What are your key areas of interest?

NW I began collecting covers with airmail: first flights especially and the Palace & Cathedral postal stationery during the period 1921-1932 kept appearing in my collection.

I met John Allen, another Nicaragua collector, at a stamp show and we became friends. When he saw that I had gathered many interesting 2c postal stationery envelopes he suggested that I exhibit them.

John was an experienced exhibitor. He laid out sixteen blank pages on a table, placed my envelopes on the pages and said to write something about them on each page. Over time he edited my descriptions and showed me how to mount the envelopes and helped me to enter the sixteen page, one frame exhibit in an A.P.S. stamp show.

I received a gold medal and so naturally I continued, although subsequent exhibits received every medal possible with only a minority of gold ones.

CLA What have been the main challenges in building your collection?

NW I now collect mainly to exhibit, so obtaining a critical mass of material is the biggest challenge. Fortunately I have been doing this in the company of a group of like-minded Nicaragua exhibitors. We have traded and occasionally sold material between us to get things we ‘needed’ for exhibits by giving up nice material to others that they ‘needed’ for their exhibits or collections.

eBay and other auctions have become more important in recent years but none of us has had sufficient money to buy huge holdings or previous persons’ exhibits for many tens of thousands of dollars.

CLA Tell us about some of your favorite items in the collection.

NW Domestic uses that have survived and covers to destinations other than Germany and the United States are the hardest to find. So they are most precious since they ‘balance’ the exhibit.

CLA If you could add one item to your collection, what would it be? Why?

NW Any use from the Department of Zelaya (on the isolated Caribbean coastal area) during the period when the currencies and postal rates differed (circa 1902-1912) from the rest of the Country in Western Nicaragua. These are very difficult to find and are avidly sought after by all advanced collectors of Nicaragua.

CLA Do you have other collecting interests?

NW I only collect Nicaragua stamps and those just for exhibits. I have also collected some local and regional postal history but those collections and small exhibits are more for fun than for National level exhibits.

CLA What advice do you have for a new collector considering starting a Nicaragua collection?

NW I recommend joining the Nicaragua Study Group, doing your research by looking at past issues of our journal Nicarao (available on CD) and talking to the members via email or at stamp shows. There are many opportunities remaining to build important, unique collections and exhibits but without knowledge it is easy to become discouraged if you waste effort and money needlessly.

One can easily and cheaply collect large numbers of Nicaragua stamps and covers and fill albums and binders –  and that, of course,  is just fine. But if you want to make a real contribution to Nicaraguan philately it makes sense to ‘study the terrain’ first.

The good news is that there are so many niches open that you will still find yours.

The Nicaragua Study Group can be contacted by emailing Michael Schreiber at momotombo@woh.rr.com

New to Nicaragua? Check out Graham Beck’s excellent video on Nicaragua in the Exploring Stamps series.

Do you have a collection of Latin America that you would like to share with readers? Drop me a mail at nick@classiclatinamerica.com with your details.